Progress through June and early July 2013 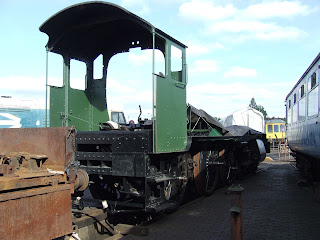 Having been moved from the 'King Shed' at Tyseley, the chassis basks in the late afternoon sunshine whilst fresh coats of paint on the drag box and cab dry. 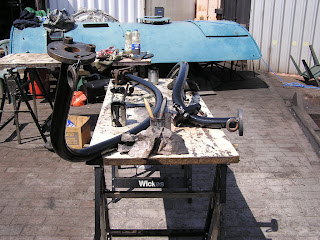 The sections of top feed pipes that couple to the clacks receive a coat of paint. The olive that forms the seal between the pipe and clack can be seen temporarily secured to the pipe flange. 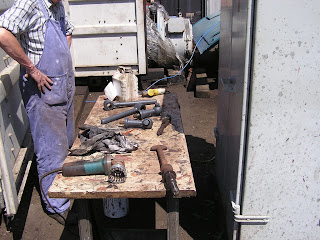 With the boiler approaching completion, attention is turned to the ancillary items required on its return which include handrail fittings and the smokebox door dart and handles. 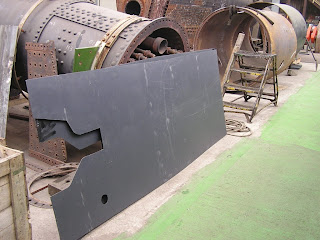 Inside the New Works at Tyseley, two new sections of boiler cladding that have been manufactured by the working parties await rolling. 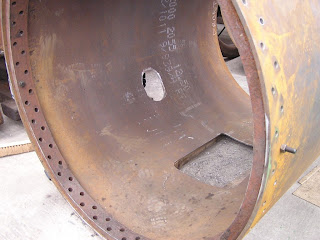 A new smokebox has been manufactured and the apertures for the blast pipe and steam pipes have been cut. 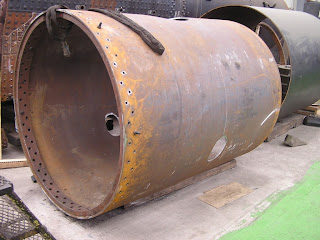 Another view of the new smokebox  with the aperture for the chimney cut and the reinforcing ring for joining to the boiler barrel has been trial fitted. The picture shows an interesting comparison between the smokeboxes for a Manor and in the background, that for a Castle 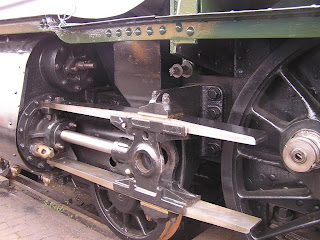 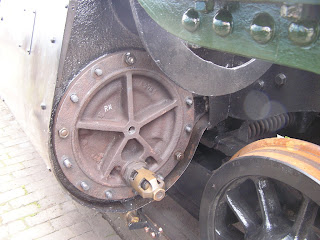 With the pistons back in place, 'boxing up' has started with the replacement of the cylinder covers. The side rods have been cleaned in readiness for the bushes to be pressed out and re-metalled, machined and returned to the rods.
SMOKE BOX DOOR 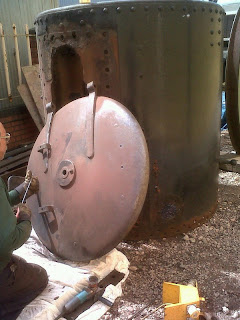 The old paint on the door is removed. 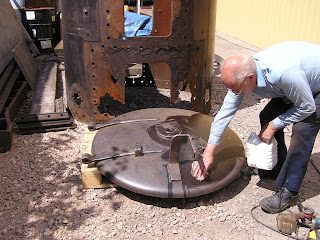 The door is cleaned prior to painting. In the background can be seen the heavily corroded smokebox from a double chimney Castle 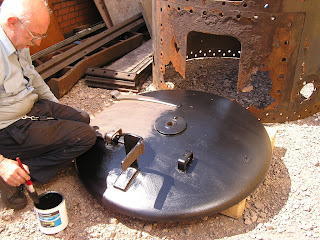 Finally a coat of heat resistant paint is applied.
THE MOTION 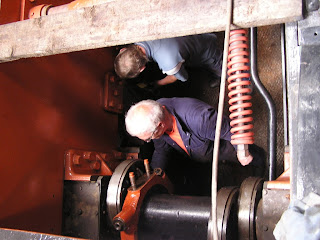 Looking down from the running plate above the centre driving wheels, eccentric strap L2
has been fitted to the eccentric sheaves. The strap is coupled to the expansion link by the eccentric rod which bolts onto the two studs. 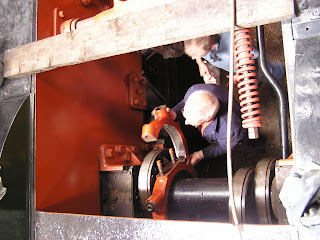 With eccentric strap L2 in place, L1 is fitted to the sheave. The eccentric straps convert the rotary motion of the axle to a reciprocating motion to drive the valve gear.
DRAW HOOKS 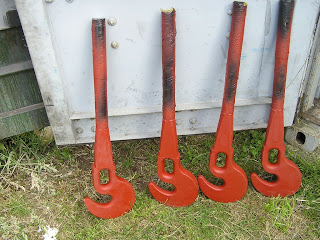 Delivery has been taken of the batch of draw hooks that the Group has had manufactured for G.W.R. locomotives. The long shank version is seen above. 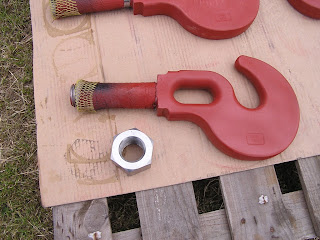 The short version of draw hooks were manufactured simultaneously together with the retaining nuts. These hooks have been manufactured to mainline standards and a quantity have already been ordered
by other G.W.R. locomotive owning groups.
Posted by Unknown at 14:05